ITU World Champs – it was ‘epic’

Apologies – it’s been a while! Since I found out in late June that I was heading to the ITU World Champs in Edmonton, Canada and then to Mallorca for the ETU Middle Distance Champs it’s all been a bit mad with training, organising travel plus the usual day to day family life and work.

In a word, Edmonton was awesome! To be honest, in the lead up to it I was having serious reservations about going. The doubts had set in, was I really be good enough to be there, what if I came last, what if I had a mechanical on the bike and didn’t finish and a whole host of other scenario’s were going through my mind. I had been training well with a 10km PB, a cracking duathlon at Silverstone and over a minute off my Parkrun PB. Plus I’d had a great swim and age group win at our local Big-Cow triathlon but the enormity of going to Canada was weighing on my mind. There are a lot of better triathletes out there and I felt a bit out of my depth. However, this was a once in a life time opportunity, I took some man up pills, packed up my bike, my kit and the family and off to Edmonton we went.

On arrival in Canada it finally sunk in that this was kind of a big deal. Our hotel reception looked like a branch of Corley’s and was full of people in national kit. As one of the GB team hotels, it also seemed to be home to half the US team and a fair few Kiwi’s plus the odd business traveller slightly bewildered by all the half dressed people walking around with their bikes!

Much of our first few days seemed to be taken up with admin and watching the other races. Register in one place, drop bike off to the mechanic in another, swim reccie at the park, bike reccies, team meetings, opening ceremony, bike racking plus trying to fit in some training. But having watched some of my GreenlightPT team mates in the Aquathlon and Sprint races it settled my nerves. I was also reassured by one of my teammates who I know from home who was in the same age group as me. Karen had travelled out there with her family too which was great as our kids know each other and she’d competed at the ETU Champs earlier in the year so knew how these events work. I think I’d have been a bit lost without her as it was really helpful to have someone else who knew exactly how I felt. 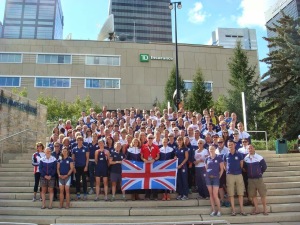 Race day day dawned and I was up at 4:30. The BTF had arranged breakfast at 5am for us although  I think the hotel may have over estimated the need for the full fry up – however there was quite run on the porridge! We had to be at the park early as transition shut at 7am. Although the bikes were already in place we still had to set up shoes, helmets and have our wetsuits checked. Rather than rely on the free public transport (which was actually very good) I got a taxi with Karen from her hotel which was great as it was one less thing to worry about. 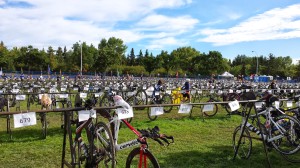 Transition – it was huge!

We had to be in the athletes village about a half hour before the race. To get a decent position on the pontoon you need to be at the front of the queue in the holding area. So we were. We were marched across to the swim start behind a lone piper and it gave me a bit of lump in my throat – this was it – the World Champs and I’m in the race. I had nothing to lose so it was race face and game on. I managed to bag a space on the far right. In the swim reccies I reckoned this was the best spot – you hit the first buoy on the outside away from the usual crush – however several other girls had a similar idea and before we’d even stepped on thev pontoon there was some argy bargy going on but I held my ground and as the buzzer sounded, two steps, dive and off I went. I surprised myself that after 50m I was in clear water – a bit worried that I may have jumped the gun I could see a pack to my left and one other swimmer to my right. The GreenlightPT sessions were paying off! First buoy was fine but with the whole field then turning right about 50m later the fun started! I settled into my pace and tried to find some feet to follow. Halfway round the second loop the next wave caught us up – they’d only started 3 mins behind us so not surprising although they take no prisoners and swam straight over the top in order to keep their line.

Out of the water and there was a long run to transition – and it was loooong – 100m, then through the elite transition then along a bit further then round the edge of our transition – I was puffing well by then. Running after a hard swim is tough, but with a wet, wetsuit it’s really hard work. Transition was OK – the chips were so big I struggled to get my wetsuit over the top but got there in the end and ran another 100 plus metres to get to the mount line.

My bike is my weakest event and although I’d been working on it I knew I was going to get a master class in riding a bike quickly. Within a half mile of transition we had an 8% hill – just what you need to get the legs and lungs going.  I’m sure it wasn’t that bad on the reccie! But, I still managed to pass a few people although they all came back past me on the flats and downhills. Groat Road was a long downhill – I stopped looking at the speedo…there were a couple of other out and backs before the long climb up the other side of Groat Road over the river. A long twisty climb, again, passing people left right and centre until we reached the top and then they all come back past me again! Totally outclassed!

Two laps of this route meant we got to do a brief loop in the park and could hear my husband and son cheering. Another loop done and it was out for the run. We had to run two sides of the transition boundary before hitting the run and out into the park proper. First part of the run was on road but then it turned to off road. Very dry and sandy paths. It was hard to get a grip and with tired legs took a while to get going.  The first 3km followed this off road path, though the woods with few spectators and then eventually came out onto road up to a turnaround point before heading back towards the main arena. A quick turnaround and back out for the second loop. It wasn’t the most inspiring of runs and the off road section was really leg sapping by the second lap but I was passing people and felt strong.

The final couple of hundred metres were on the blue carpet, past elite transition and then 100m down to the finish line to the roar of the crowd. I had given it my all and had just completed the World Triathlon Final! Boom! 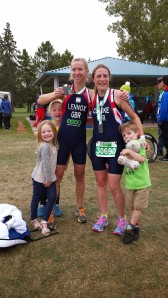 Karen, me, the kids and our medals

I was 42nd (and not last), posted my best standard distance time ever (despite nearly 6 minutes in transition) and had done my fastest ever bike split, averaging over 19mph (quick for me) my run was OK but I reckon it would have been quicker if I hadn’t been desperate for the ladies! Karen was an amazing 18th place – if ever there was an advert for hard work paying off – that was it!

So what next? Most people would probably call that a wrap to the season but I’ve still got the ETU Middle Distance Champs in Mallorca in October so back to the grindstone with longer rides and runs but as a final word if you ever get the opportunity to take part in an ITU or ETU event with the GB Age Group team – do it. It’s not cheap but the memories are worth it – roll on Chicago 2015 (if I qualify!)! What’s not to like – it was epic! 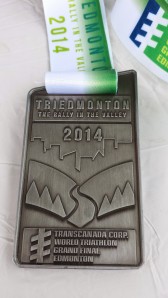 The bling from the front… 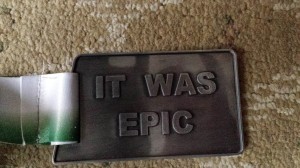 …and from the back!

How many of you have popped by

IM CopenhagenAugust 20th, 2017
I will become an Ironman!

My journey through my life changing rugby injury... Life as an above knee amputee.

Running through life, drinking as much tea as possible

Ramblings about training for a middle distance triathlon

My five year journey to awesomeness...

Moving onto bigger and better things

A rebel with a cause.

A man, his lycra and his demons

Pretending I am an actual superhero

For the love of Lycra
runandtri

A beginners guide to running and triathlons

The intimate adventures of an over-worked and under-paid mother-of-five social media guru with a serious and worsening endurance sport habit...

Views from the Third Wave

The thoughts of an aspiring mid-life runner and triathlete

Chick who loves to race!

it's all about connecting, and using that connection to make things better

Finding confidence and strength in fitness

Journeys of Rescuing and Running

Living life one pair of running shoes at a time.

a veterinary student triathlete in training

Blog of a self confessed Triathlon addict

Life and laughs of an Age Group triathlete